This program will toggle the Num Lock, Caps Lock, or Scroll Lock keys at user defined intervals. It is possible to setup which keys to toggle and how often to toggle each key. This program also has command line support, so you can setup a shortcut to toggle each key. It can also be added to the Windows startup, where it would automatically begin toggling the keys. The best part about this program is that it is totally hidden to the user, and they will be unable to determine the source of the toggle. 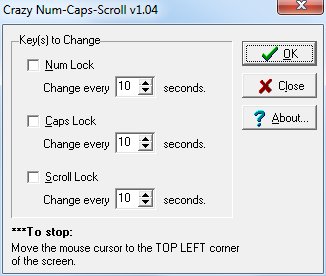 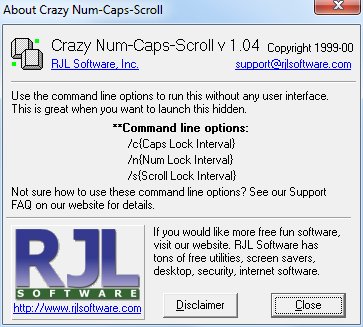 Not sure what a command line is or how to use it? Read our detailed explanation here.

Move your mouse pointer to the TOP LEFT corner of your screen. This will stop the program from running in memory. If you have successfully moved your mouse in the correct position, the program will close and display an About Box Screen. Once you close this screen, the program will exit. Exiting the software will allow Windows to delete the file.

Crazy Num Caps Scroll will run on these Windows editions: